So, we’re finally in April. I use the word ‘finally’ here because, despite not having much to look out for in the world of Vanguard this month, we, Royal Paladin players, get our hand on a new little gem (pun fully intended) in the Cardfight Pack Vol. 9 offered this season. Of course, here, I’m talking about Fearless Jewel Knight, Julia who will not only change the entirety of the Jewel Knight’s play style, but also make use of a new mechanic that will make other units way more relevant than they previously were. 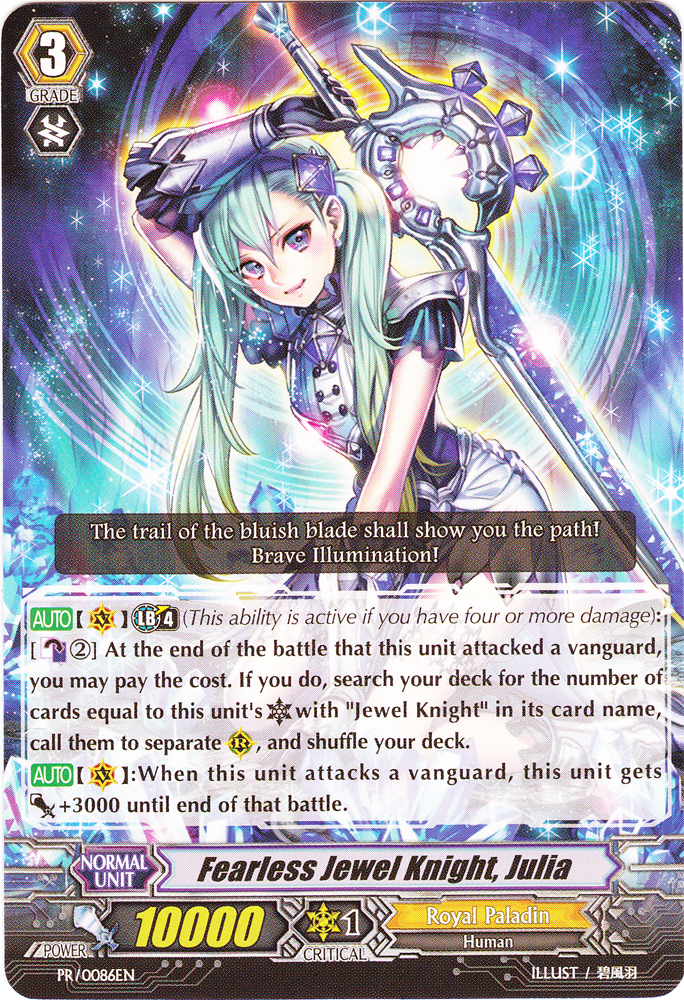 To be honest, I’m kind of surprised that we got Fearless Jewel Knight, Julia in that specific time frame of the game. Considering Bushiroad has an history of giving us Royal Paladin promos just when they become obsolete and irrelevant, I’m shocked to see that Julia comes in at the perfect timing and right when we need her. Julia opens a lot of doors and new possibilities for the build. For one, since Julia replaces Salome as our main vanguard, we no longer have to watch out for the number of Jewel Knights in our builds since both especial counter blasts and the ”4 or more Jewel Knight rear-guards” ability requirement Salome had are gone. This gives us a lot more freedom in including old Royal Paladin units and triggers in the build. However, that does not simply mean that we can just pitch whatever we like in the build either. Julia’s own ability can only be used to call units with ”Jewel Knight” in their name while the Jewel Knight units called by Julia will most likely need many of their own on the field to function properly.

Speaking of her ability, her Limit Break 4 is something very unique that we’ve never seen before. For two counter blast after she attacks, Julia is able to search the deck for Jewel Knight units up to the number of critical she had this turn and call them on a rear-guard circle. Not only is it a new concept altogether for the clan, but it’s also the first time Royal Paladins has the possibility to tutor more than one unit from the deck for two counter blast! Of course, it goes without saying that this ability pairs extremely well with Pure Heart Jewel Knight, Ashlei‘s Ride Break ability as she guarantees at least a +2 off Julia’s ability without counting potential triggers.

This is the most common way of using Julia’s Limit Break ability and probably the most efficient play when we’re not too far into the game. By filling empty rear-guard slots after the Ride Break, we can get an edge over our opponent in term of field presence and card advantage since we’re potentially saving ourself from playing two cards from our hand.

Also, since her ability doesn’t specify that the units called have to come on an open rear-guard circle, Julia can use her ability even though the field is completely full and call the new Jewel Knights over an already placed unit. This enables a lot of power play possibilities as she can use her ability to act as pseudo stand triggers.

These power plays become very deadly during the late game when your opponent has limited resources and is one damage away from losing the entire game. They can also be very beneficial for us at the same time since, as seen in the situations above, we can get a little bit more overall guard value by replacing grade 3 rear-guards and/or use Prizmy ability to ditch what we don’t need all while applying pressure.

As for the overall Jewel Knight build itself, it doesn’t change much from the old Salome/Ashlei build. Other than the obvious Julia & Salome switch, the trigger line-up can change due to the fact that Julia doesn’t need especial counter blast. Also, since her ability works with how many critical she gets, a set of 10 to 12 critical triggers with Alabaster Owl is most commonly seen and played with her. In the grade 1 line-up, Toypugal can easily be replaced by Little Sage, Marron for Julia/Ashlei to consistently hit 21 000 with their second ability and help Sybill reach the 16 000 power mark.

Definitely try and get yourself a playset of Julia if you’re already playing this deck as it’s really just an upgrade from the previous Jewel Knight build. Below is match video where Julia faces off against the traditional Majesty Lord Blaster. Give it a look if you want to see the deck in action!