There seems to be a lot of mixed feelings when it comes to the potency of Great Nature in the current meta. Some say it’s the best thing to come out of the Mysterious Fortune extra booster while others seem to think it’s a bit too honest to compete with the best. I’m personally part of the people that think the latter, but despite what people think, a few Japanese players managed to prove the clan can definitely win major tournaments if it is built and piloted the right way.

Use landscape mode with phone or tablet for a better view

In the span of only a month after its new support released, Great Nature managed to secure a top spot at three different major tournaments. It may be a small number, but it’s still a great accomplishment if we consider the amount of post-VBT07 clans with new support that got rendered completely irrelevant thanks to the current top charting clans. Out of those three top placing Great Nature decks, two of them were posted online for the world to see. As always, we will use these lists to understand how to build and play the clan optimally.

Regardless of the build we look at, we can see that the decks have changed significantly since the old builds: the entire Hammsuke ride chain seem to have been completely cut out in favor of more consistent units, the trigger lineup now includes at least a full set of critical triggers instead of full fronts and some staple units that were most of the time played at 4 copies in the old build are now played as tech cards. 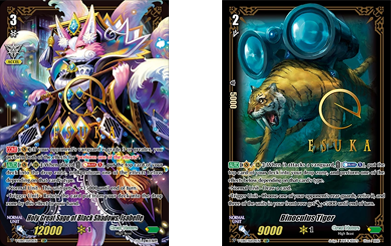 Isabelle is the new big addition to the clan and is part of the reason why many players were excited about the potential of the deck prior to its release. Isabelle is basically a huge consistency booster to the clan as she guarantees that we hit the right lottery abilities with our rear-guards by making them both trigger one after another. This passive ability makes one of our best lottery unit, Binoculus Tiger, an extremely powerful and resourceful unit. With a single counter blast, he draws us a card, gets rid of a pesky opposing rear-guard and gives 5000 power to three front row rear-guards. A rear-guard doing this much for a single counter blast was almost unheard of until now. Using most of our counter blasts to activate Binoculus Tiger is definitely one of the best way to keep the tempo of a game and achieve victory as a result. They are both staples at 4 copies for that reason. 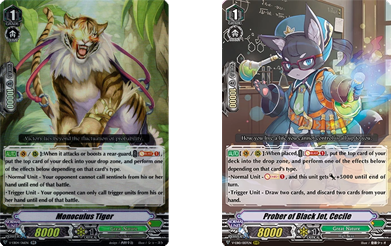 Although they are not as good as Binoculus Tiger, Monoculus Tiger and Cecil are two other lottery units that also benefits from Isabelle’s passive ability. Whether it’s a big or small attack, Monoculus Tiger now forcing your opponent to guard his attack solely with non-sentinel triggers can be very useful when we’re trying to push for the win. As for Cecil, his drawing ability can be really helpful when we’re in a pinch and trying to dig for more beatsticks or a specific Grade 3 to ride next turn. Some may say they are both way too situational to devote that much space in the deck for them but, fact of the matter is, they are very essential to the build if the likes of Barcode Zebra, Scale Toucan and Hammhiko are present. Monoculus is played at 3 copies in both builds while Cecil is played at 2 and 4 copies.

Scale Toucan is a nice and versatile unit. He becomes a 13k booster or attacker whenever a lottery ability is activated during the turn. It’s a really handy unit to have when going against a Force clan. Its first ability, while decent, is not really used that much as there are nothing really worth bouncing up in hand. In the rare cases where we really need to dig through the deck for a specific card, we could technically use it to bounce Hammhiko or Cecile up in the hand to reuse their ability again.

Barcode Zebra is hands down the second most important rear-guard of the deck after Binoculus Tiger. With the amount of lottery abilities we can do in a single turn, he can reach very high numbers extremely fast. Have two Binoculus Tiger on the field ready to activate? That’s a +20k power to Zebra. Have a Scale Toucan behind him also? That’s an easy 42k power column. In short, Barcode Zebra is one of the most valuable rear-guard in the clan which is why he’s played at 4 in both builds.

Finally, we have Hammhiko who, similarly to Scale Toucan, gains 5000 power when a lottery happens during the turn. Hammhiko is particularly important in the deck because it triggers itself by using its very good first ability. Just like how Commander Garry Cannon was useful to Spike Brothers, being able to draw two cards and ditch one card in the earlier part of the game can help us dig through the deck and look for the wanted grade 3 at that particular moment. This is especially important in Great Nature as the ideal Grade 3 unit ride changes depending on if the player went first or second. For that reason, Hammhiko is, most of the time, the ideal Grade 2 ride on top of being a lottery enabler and a decent beater. 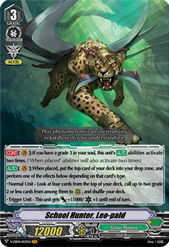 One of Isabelle’s biggest drawback is that her passive ability cannot be active if the opponent’s Vanguard is not Grade 3 or higher. This means Isabelle becomes significantly less useful when she’s the first one to reach Grade 3 between the two players. To mitigate that drawback, Leo-Pald is played as a staple back-up Vanguard in the builds. Whether or not he mills a normal unit with his lottery ability, he is, most of the time, a better Vanguard than Isabelle at that moment. Calling two units from the top of our deck is, obviously, the ideal scenario but getting the +15k power boost with the extra critical can also be pretty devastating this early in the game when the opponent might not have the cards in hand to guard it. 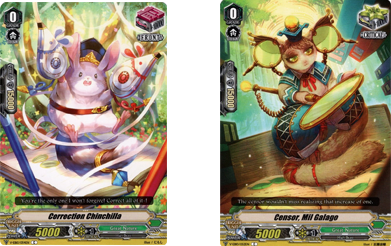 With Binoculus Tiger consistently being able to give power to the front row and Barcode Zebra getting buffed by all the new lottery effects, our units not being able to reliably reach high numbers is not a problem anymore. Therefore, including critical triggers have become a viable option in the Isabelle build. 4 to 8 critical triggers can now be played and we’ve even seen players go for the really aggressive approach and play up to 12 critical triggers. They do so by removing the draw triggers and some of the less useful units (i.e Monoculus Tiger, Cecile and Geograph Giant) to include Robust Bachelor, Antiate as a replacement for the lost draw sentinels. However, because sometimes we’ll be riding and sitting on Leo-pald, front triggers are still viable. That is why there is no real optimal ratio when it come to splitting the amount of critical and front triggers played in that deck. If you’re unsure, you can always go with the safe route and play 4 of every type of triggers.

Some cheeky strats you could use with GN is that you can go first play cecile, get normal unit, soulcharge G3 and then on your G3 turn, go leopald and it will trigger the effects twice. Also you can use leopald to check Top 4 G2 or less, bring a trigger ( if you don’t have anything else and you need some defenses ) with toucan [from hand] skill to return that trigger to hand.

Well.. additional of isabelle and hammhiko makes Great Nature have 2 deck that playable. I played Hammsuke build with 12 front and it works.

Nice artikel to read, but should me mentied that I am a great nature main and that is why it is intressting for me.