After Bushiroad decided to release Booster Set 11: Seal Dragons Unleashed before Booster Set 10: Triumphant Return of the King of Knights, I was both sad and hyped at the same time. Sad because it meant that Royal Paladins wouldn’t get their new archetype support until holidays, but happy because it also meant that the most over-hyped clans among English players right now would see the light of day a little later during the year in our meta. Diversity has always been a big concern for me, so prolonging the Liberator and Eradicator bandwagon a couple months back is not something I’m going to complain about. The other reason why I was happy about that switch in dates was because I knew this set featured Angel Feather support for it’s brand new archetype, so knowing I’d be getting it a couple of months earlier made me pretty excited for it!

Angel Feather’s new archetype is called ”Celestial” and they focus on getting specific cards into the damage zone so that they can get certain effects off when they’re on the field – most of them being gaining additional power when attacking. For now, compared to other Angel Feather builds, Celestials are pretty straightforward in term of strategy as they’re really only about beating the opponent down with big numbers instead of using their damage zone as a toolbox and making multiple plays from that. 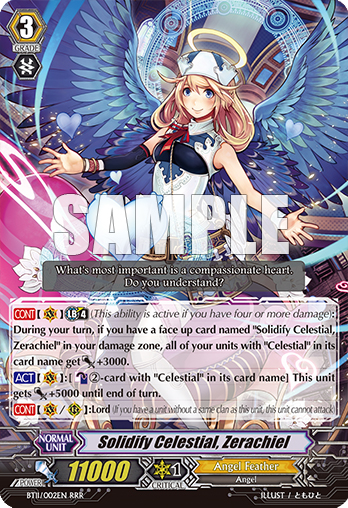 For starters, we have our new cute looking main Vanguard : Solidify Celestial, Zerachiel. She’s the unit that makes this whole new concept actually possible and the unit we’ll want to see most of the time when playing this build. When it comes to her base stats, Zerachiel packs an amazing 11 000 static body which is a first for the Angel Feather clan. In revenge though, Bushiroad decided to give her the new restriction called ”Lord” which prevents us to play anything but Angel Feather units when she’s on the field.

As for the meat of the card itself, Zerachiel packs a very similar Limit Break ability to Arboros Dragon, Sephirot. Her Limit Break 4 ability enables her to give additional power to all of our Celestial units for the turn if the requirements for it are met. In Zerachiel’s case, all she needs for her ability to trigger is a face-up copy of herself in the damage zone and with that, she’ll be able to give a +3000 power boost to each and every Celestial units on our field for free and that, including herself. Like in Sephirot, this ability alone is the core of the deck as it’s able to make our rear-guard columns reach insane amount of power as it’s technically a +6000 power boost every time a column swings at something!

And as if that wasn’t enough, Zerachiel’s second ability enables her to give herself an extra 5000 power for two Especial counter blast. Although it can seem redundant with the aforementioned ability, it’s still a nice thing to have as a back pocket kind of ability. In certain match-ups (i.e crossrides), some numbers can be pretty hard to reach even post Limit Break and the +5000 power can help push for game when used at a good timing. 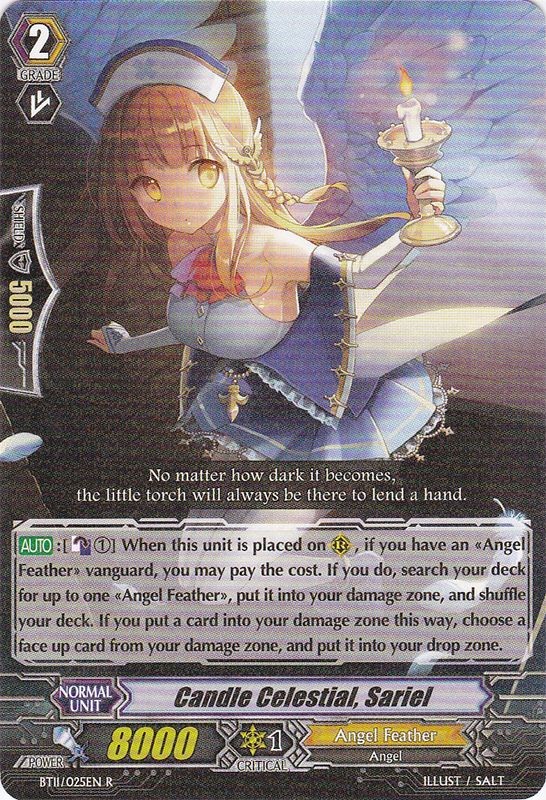 I can already hear some people say: ”It’s great and all, but having another copy of herself in the damage zone can be pretty inconsistent even for Angel Feathers” Well, I agree that it would’ve been the case if it wasn’t for this amazing unit Bushiroad gave us. Candle Celestial, Sariel is one of the most important unit for this deck and arguably one of the best unit for the clan as a whole because of its versatility and utility. For a sole counter blast, she is able to go fetch an Angel Feather unit from the deck, put it into the damage zone and put one face-up counter into the drop zone. As you may have already guessed, this ability is incredibly great to setup Zerachiel’s Limit Break requirement as we can just search for a copy early in the game and be ready when we reach the Limit Break point. Sariel provides a lot of consistency to Zerachiel and the deck’s strategy as a whole considering that without her, we would’ve relied on getting her as a damage randomly or drawing her and use some sort of swapping shenanigans to put her in the damage zone. Now, as long as we have Sariel and two open counters (which shouldn’t be that hard in this build), Zerachiel is pretty much guaranteed all game long.

Sariel also has the ability to set up a lot of plays with other units from the clan, namely the damage swap units. Because she can go fetch any Angel Feather units from the deck, her ability in conjunction with any damage swap abilities can be used as a toolbox engine to get what we need in our current situation. For example, if we need a sentinel or a specific card into our hand, we can search it with Sariel and get it back with Turiel, LMG Nociel, Ramiel or Battle Cupid, Nociel the next turn. Need a specific booster or attacker on the field? Do the same and superior call in a rear-guard circle with Penuel‘s ability. About to get grade lock on turn 3? Search for Ramiel with Sariel on turn 2 and get her back into your hand with aforementioned damage swap units. All of these kind of situations in which she plays a big role in are the reason why she is such a valuable unit for the whole clan and also why she is needed more than a single time in this deck. Something to keep in mind however, is that to use her ability, we absolutely need two open counters despite the skill requiring one since the unit getting sent to the drop zone has to be a face-up damage. Using this skill with a single counter open accomplished absolutely nothing since we’d be dumping the unit we just searched with the ability. 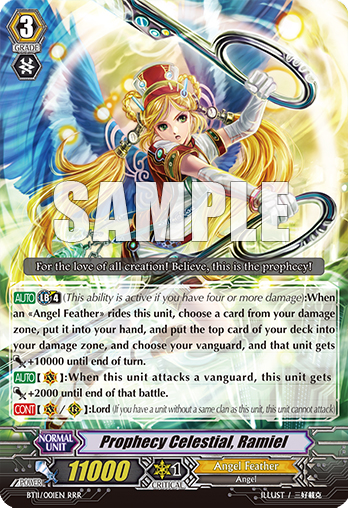 Before Zerachiel comes into play, we’ll probably want to see this unit in our Vanguard circle first. Prophecy Celestial, Ramiel is our other big unit for the Celestial archetype and is one that exploits the somewhat new mechanic called ”Break Ride” or ”Ride Break”. Like Zerachiel, she has an above average 11 000 body and the ”Lord” restriction to compensate for that, but what makes her different than the latter is her better utility as an early game Vanguard. Bushiroad introduced the Break Ride mechanic already seen in Bermuda Triangle to multiple other clans in this set and Angel Feather is part of those clans that got it. To those who don’t already know this, Break Ride is basically a Limit Break 4 ability that activates when another unit from the same clan rides over the unit with the Break Ride ability. In most cases, Break Ride abilities gives the new Vanguard an additional 10 000 power boost for the turn and activates another effect related to the clan’s strategy.

It is exactly the case for Ramiel. At Limit Break 4, when another Angel Feather rides over her, she’s able to give an additional 10 000 power boost to that new Vanguard and enables us to take back one unit from the damage zone into our hand and put the top card of our deck into the damage zone. While the second ability from the Break Ride doesn’t directly support the build’s winning image (adding a random card into the damage zone is way too inconsistent for it to work with Zerachiel), the Break Ride is still something nice to have before Zerachiel comes into play. The additional 10 000 power boost helps the clan’s beat-down theme and, being able to use our damage zone as a toolbox once in a while is never a bad thing as it can help us retrieve key units to maximize our field’s efficiency or protect ourselves for the next turn. Also, as mentioned earlier, her damage swap works well with Sariel since it can either un-flip the used counter from Sariel or take back the unit she just put into the damage zone. The other reason why Ramiel is considered the better candidate for the early Vanguard spot is because, unlike Zerachiel, Ramiel is not a completely vanilla unit during pre-Limit Break period. Her second ability is a +2000 power boost to herself which makes her able to swing for high numbers early in the game forcing our opponent to take damage early damage.

Overall though, as a Break Ride unit and compared to the other ones out there, Ramiel is pretty underwhelming. Since her break ride ability doesn’t do much for the main strategy of the build, it is most of the time overlooked. However, it can still be really useful at times and this, packed with her above average base stats and her Celestial name makes up the most solid Vanguard during pre-Limit Break period. 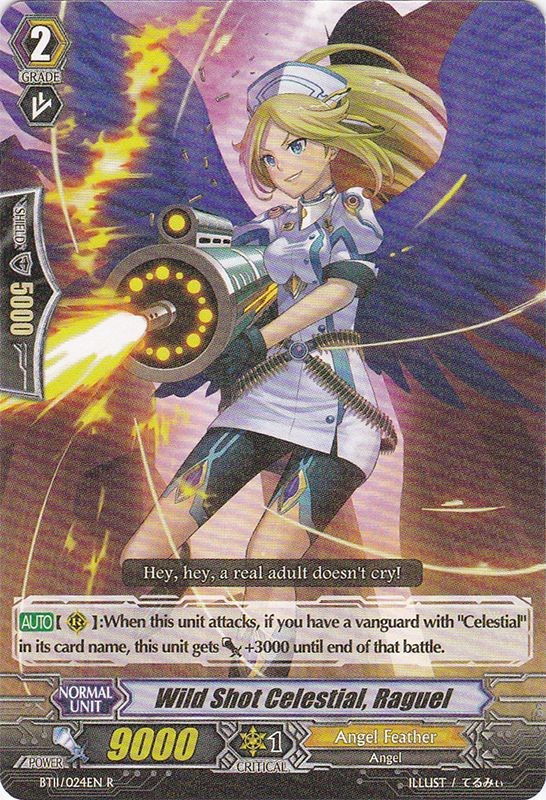 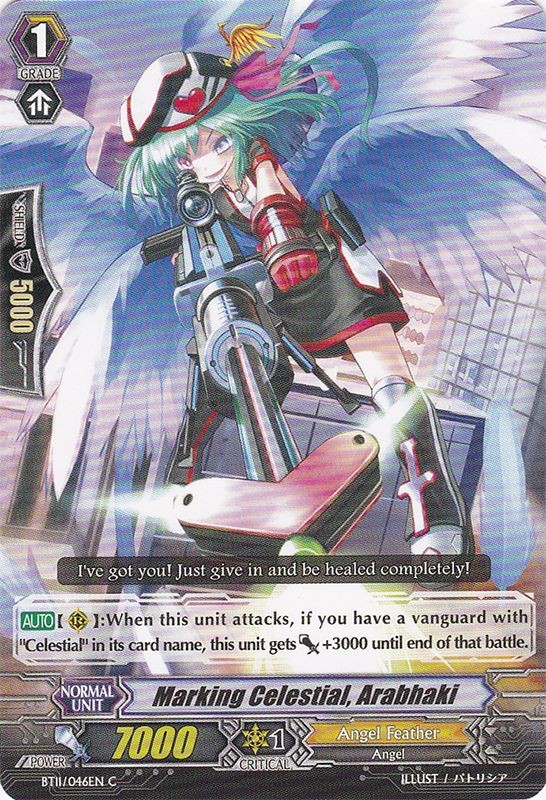 Finally, we have our most important minions that are pretty much staples in this Celestial build: Wild Shot Celestial, Raguel & Underlay Celestial, Hesediel. Raguel is our typical 12 000 attacker, but in this build she becomes a very important unit because of the aggressive nature of the deck. Being able to reach 12 000 power means that she’s one of the few that can achieve key numbers for certain match-ups. Indeed, under Zerachiel’s ability, she becomes a raw 15 000 beatstick which is amazing. At that point during the fight, any 7000 Celestial booster makes her swing for 25k which is a stage 4 number against 10 000 Vanguards and with Hesediel boosting her, she can reach 27 000 power which is good against 11 000 Vanguards and Majesty Lord Blaster. Unless Booting Celestial, Sandalphon is played, 27 000 is the highest number the deck can achieve in the rear-guard zone, so it’s obvious that Raguel boosted by Hesediel is the most optimal column to have.

Speaking of Hesediel, Underlay Celestial, Hesediel is really one of a kind type of unit. The reason being is that, unlike other typical 9000 boosters out there, she can also be a 9000 attacker if the requirements for her ability are met. This makes her such a good and versatile unit in this type of deck as she can either serve as a really good booster or a decent beater when needed. Under Zerachiel’s Limit Break, she becomes even better as the +3000 power Zerachiel provides makes her able to boost units placed in front of her for 12 000 or, if she is by herself, swing for 12 000 alone. Since Hesediel and Zerachiel share the same requirements for their abilities to activate, her reaching those numbers is pretty much unconditional when Zerachiel is on the Vanguard circle at Limit Break 4. Hesediel is another reason why Candle Celestial, Sariel is known as the most important unit for this build. Not only does she set-up Zerachiel’s ability, but also sets-up one of the bigger booster unit in the game at the same time.

Example of a Zerachiel Celestial Deck

For closure, Zerachiel Celestial oriented build is all about maximum efficiency with the minimum amount of set up required. They focus on getting high numbers on every of their columns to beat the opponent down as fast as possible. The downside to this is that they do not rely on neat little tricks to get advantage like other builds and clans do. Some like it because of it’s great efficiency in creating power columns and overwhelming their opponent with brute force while some others prefer the more complex Angel Feather builds already out there. It’s a question of preference, but if you’re more of the former, you might want to take a look at this particular Angel Feather build.

Below is a nice match video demonstrating Celestial’s raw power against Narukami’s Eradicators as well as the Celestial deck profile used at the end.

Credits to whaleandrus for the video