Although I was never truly a fan of how the Pale Moon units looked back when they were first released, I was always very interested in their unique play-style and mechanic. Then, when the clan got introduced to their new vanguard unit back in Booster Set 07, I was even more interested in playing them as not only I liked how Silver Thorn Dragon Tamer, Luquier looked as a unit, they also enhanced how the clan worked with their soul. Fast forward to now, and with the release of the new Booster Set 12: Binding Force of the Black Rings in english comes an archetype for Pale Moon strictly centred around Luquier – how convenient, right!?

So as you may have already guessed, this Booster Set 12 blog entry will be around Pale Moon’s new archetype: Silver Thorn. Silver Thorn, like the original Pale Moon clan, focuses on establishing and manipulating the soul to make power plays during the late game. Those power plays often consist of superior calling or switching around key units from the soul directly to a rear-guard circle. 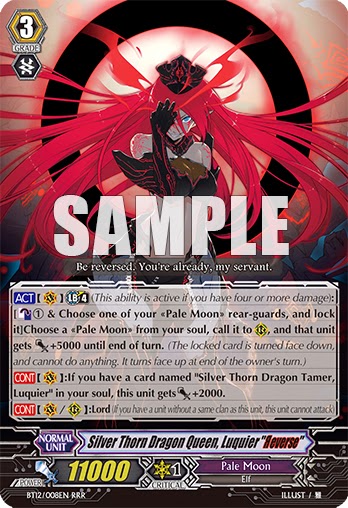 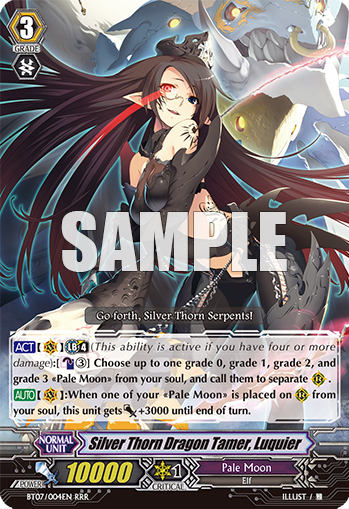 Of course, being a Silver Thorn centric archetype, both version of these Luquier plays an an important role in the deck’s main strategy. Silver Thorn Dragon Queen, Luquier ”Reverse” (Luquier ”R”), who has been introduced in this very set, is the new primary vanguard for this archetype as she offers a lot more advantage than her original form. Her being an 11 000 static vanguard and utilizing the new lock mechanic also introduced in this set (learn more about the lock mechanic: here) for her Limit Break 4 ability are the most obvious reasons for why Luquier ”R” is preferred over her original form as a vanguard unit. Speaking of the lock mechanic, Luquier R’s Limit Break 4 ability is used and well-known for being able to grind out the game and wear the opponent out of resources in the long run. Indeed, for a single counter blast and a lock, she can call any Pale Moon unit from her soul to a rear-guard circle to fill up an empty space on the field while saving cards from our hand in the process. Considering the fact that the unit coming from the soul also gains an additional 5000 power for the turn, the overall field’s fire-power remains the same in most cases since the extra 5000 power makes up for the booster we locked for Luquier R’s ability to trigger (implying we’re not playing against a 13k Cross-Ride, here). So in term of the overall advantage, we don’t lose much using this ability and on the contrary, gain advantage by using her ability every turn because of the extra unit we get for free. Combine this type of advantage engine with the fact that she is able to be a 13 000 defensive vanguard consistently due to her second ability and the mechanic of the clan, we get ourself a really hard-to-penetrate wall during the late game.

On the other hand, we have our original Luquier who we already know pretty well by now. Unlike the older builds where she was the focal point of the deck, Dragon Tamer Luquier is only used here for Luquier ”R” to have the additional 2000 power boost when Dragon Tamer’s in the soul. Although she’s the the grade 3 unit we would want to see the least by turn 3, she’s still a decent vanguard when it comes to pushing for game and pressuring the opponent. Plus, with the addition of the new Silver Thorn units that I will mention later, it is now way more easier and consistent to get the most out of her Limit Break 4 ability as the soul manipulation is no longer all left to the random-number-generator gods. However, because 3 counter blasts is a lot and a 10 000 body is frail, being able to put her in the soul without wasting a turn riding her as grade 3 unit is the most beneficial thing that can happen when playing this deck. 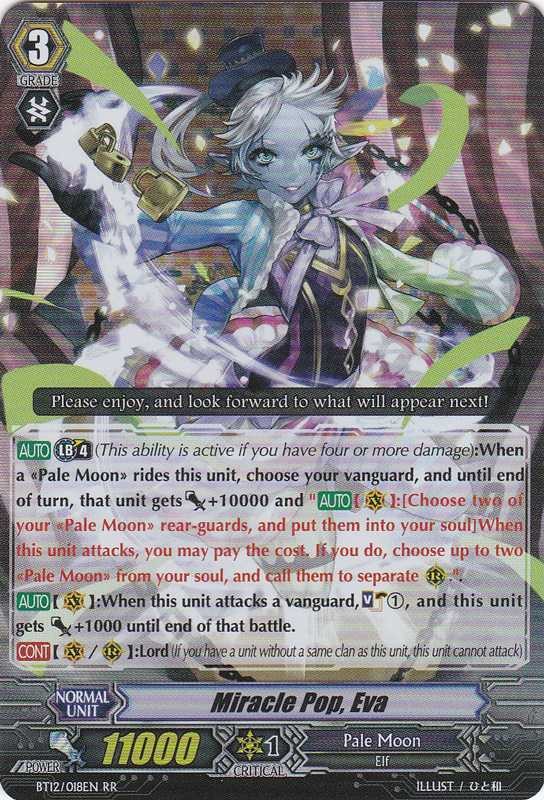 What’s this? A non-Silver Thorn unit in a Silver Thorn centric deck? Well, yeah. When you get a Break Ride unit as good as Miracle Pop Eva, some might say it’s worth to make some space to squeeze her in even though she’s not part of the main theme. Unlike the other Ride Break units, Eva doesn’t get a +2000 boost when she swings, but instead gets a +1000 boost and a Soul Charge from the top of the owner’s deck. While it may seem a little out of place, this ability enables the deck to continue to (randomly) fuel the soul even though it’s not a Silver Thorn unit standing on the vanguard zone. Without that Soul Charge, the deck would completely stop charging the soul as most units in the deck having the ability to Soul Charge requires a ”Silver Thorn” unit on the vanguard zone to do so. While it’s not too big of a hiccup in the deck’s overall synergy for the reasons mentioned above, it is still being compensated by the sheer power of Eva’s Ride Break.

If Luquier Reverse is the more defensive vanguard and Dragon Tamer Luquier’s the most explosive, Eva is the perfect vanguard that goes between the both of them. When riding another Pale Moon unit over her at 4 damage, Eva gives to the new vanguard unit a 10 000 power boost as well as the ability of switching two Pale Moon rear-guards with two Pale Moon units in the soul when the new vanguard swings. Since the ability doesn’t specify whether or not the units coming from the soul are in rest or stand position, her ability can be used like two pseudo stand triggers and enable a fourth or fifth attack during that turn which is pretty nuts!  Eva’s ride break is great as it works extremely well when it’s in conjunction with on-hit pressuring units such as Silver Thorn Beast Tamer, Maricica or on-call units such as Silver Thorn Assistant, Irina (after Break Riding with either Luquier) and Purple Trapezist. Of course, it goes without saying that Eva, if in the build, would be the grade 3 unit we would want to see most of the time by turn three because of her Ride Break ability. 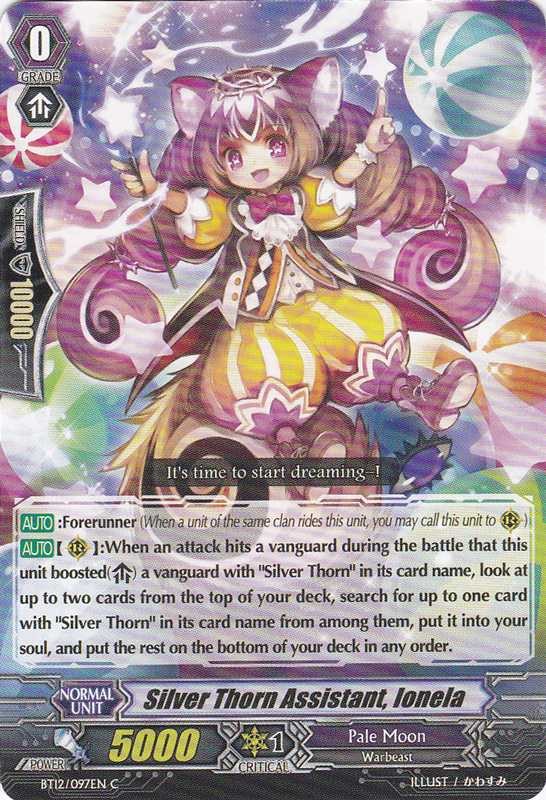 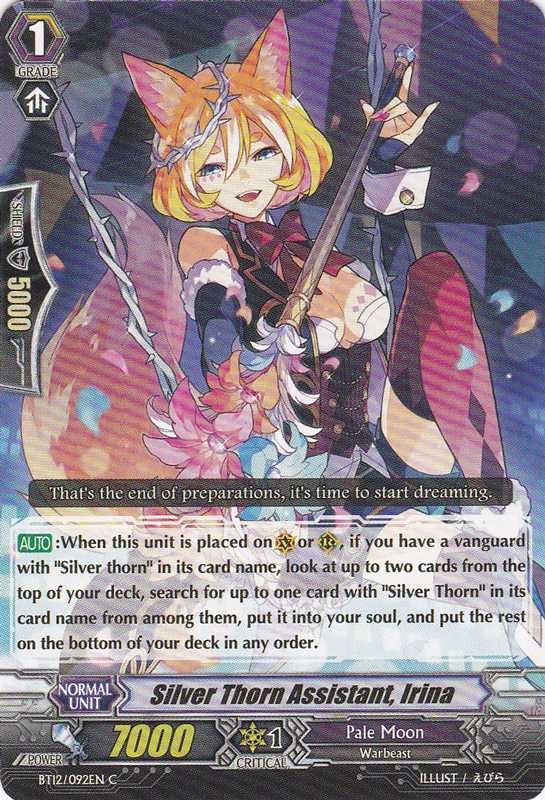 When I talked about Luquier’s and the overall deck consistency earlier, I was referring to having those two very important units nearby. Both Silver Thorn Assistant Ionela and Irina are key units to get what we want into the soul as they enable us to choose one of the two cards on top of our deck that goes in there. This is a huge improvement compared to Pale Moon’s old Soul Charging methods where they had to solely rely on luck to get what they needed. With these two now in the picture the Soul Charging method is a little bit more controlled. Ionella, the starting vanguard, enables us to Soul Charge when she is the one boosting the Silver Thorn vanguard’s attack and that it hits, so it goes without saying that you’d want her behind the vanguard all the time to get the ability off 3 to 4 times before the opponent starts guarding your vanguard’s attacks. As for Irina, her ability is only triggered when she’s called on the field and when we control a ”Silver Thorn” vanguard. Because of her requirements, she is a little bit more consistent than Ionella, but the downside to that is that she is a one time use only. Irina especially shines during the late game when we still want soul to try and get Dragon Tamer Luquier in there and where Ionella’s ability might not be triggered as often as we’d like to. As mentioned earlier, her on-call requirement can be fully exploited when paired with units that extracts other units from the soul. Our main soul charge targets with these two would have to be Dragon Tamer Luquier for the Cross-Ride with Luquier ”R” and any of the Silver Thorn beaters we run (i.e: Rising Dragon, Breathing Dragon, Luquier ”R”, etc) for the extra pokes we might be able to do after a soul extraction. 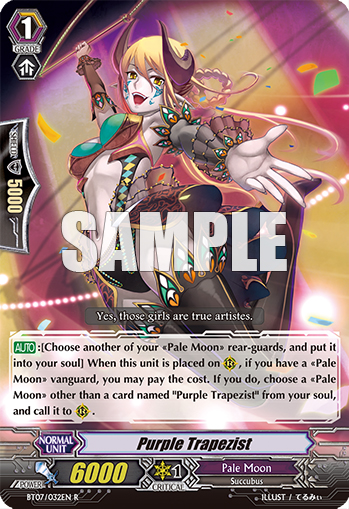 Well, she has been mentioned a couple of times already, so it’s not really surprising to see her being highlighted in this post. Back when she got released, Purple Trapezist was considered to be the light at the end of the tunnel for all the Pale Moon players struggling to get something going with the clan. Similarly to how she helped the older Pale Moon builds, Purple Trapezist greatly helps the Silver Thorn variant in term of consistency and combo-ability. Being able to switch a Pale Moon rear-guard for a Pale Moon unit in the soul when she’s called makes her one of the most versatile unit in the clan as she is both very useful when she’s in the hand or in the soul. Purple Trapezist’s primary use in Silver Thorn is to get Dragon Tamer Luquier into the soul when we have the misfortune to draw her when we’re already sitting on Luquier ”R” or Eva (Situation 1). Her secondary use in the deck is to make power plays with soul swapping units such as Eva and Luquier ”R” for a strong fifth attack to be possible that turn (Situation 2). Example of these plays can be seen in the little gif images below.

Well, I think I covered the biggest parts of how this deck is played. With new consistent ways to manage the soul and a reliable vanguard unit as well as a strong Break Ride unit, Pale Moon is more fun than ever. The Silver Thorn variant offers a lot of possibilities for the player and has a lot combo-ability potential which makes the deck far from being something redundant to play with. It’s definitely a build I would recommend if balance between good defense, offense and strong combos is something you are looking for in a deck. 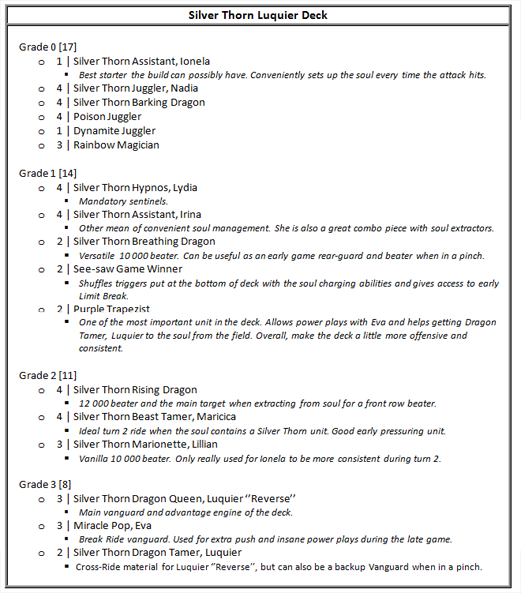