The time has finally come and one of the most awaited booster set in the history of Vanguard is upon us! Like previously mentioned in my blog entry about Angel Feather’s Celestial, Booster Set 10: Triumphant Return of the King of Knight’s order has been switched around with Booster Set 11: Seal Dragons Unleashed by Bushiroad for financial unknown reasons and this is the reason why we waited so long to get our hand on all the new goodies this booster set offers.

Booster Set 10 introduces new archetype support for many of the popular clans at the moment and Jewel Knights, the new archetype for Royal Paladins, is included among them. Similarly to their predecessors, Jewel Knights focus on producing field advantage by superior calling specific units that supports each other from the deck to field. Their way of applying pressure, also taken from the old Royal Paladins, is about attacking with additional critical to rack up the damage quickly and threatening to finish their opponent with a single blow. In short, we can easily say that the Jewel Knight archetype took a little bit of everything from the old Royal Paladins. 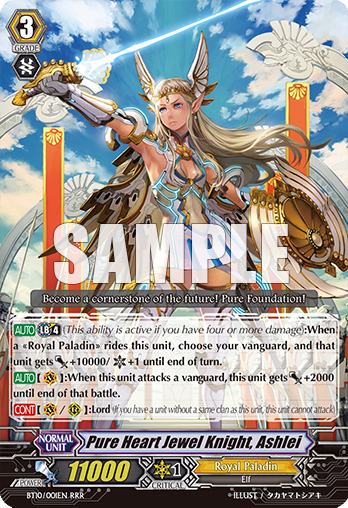 Pure Heart Jewel Knight, Ashlei is one of the only two grade 3 units offered in this set for the Jewel Knight archetype and since she is considered a Royal Paladin unit, she is known for introducing a lot of new tools and mechanics that Royal Paladins didn’t have beforehand. By quickly looking at her, we can see that Ashlei packs an above average static 11 000 body which is, don’t get me wrong, something considered pretty staple at that point in the game, but is still something we rarely see on Royal Paladins in general. Of course, to compensate for this above average number, the ability ”Lord” has been given to her as a restriction.

Another thing that has just been introduced to the clan that she possesses is the ability to ”Break Ride” or ”Ride Break” at Limit Break 4. Indeed, Ashlei’s first ability enables her to give an additional 10 000 power boost as well as a extra critical to the next Royal Paladin vanguard that rides over her at Limit Break 4. While this may seem powerful on paper, compared to the other Break Rides already available, Ashlei’s Break Ride ability is one of the most underwhelming in practice. Because of how the game currently plays and flows, gaining an additional critical as a Break Ride bonus is not something that is considered very threatening. One of the reason for that is that gaining an additional critical when both players are at 4 damage doesn’t mean much when critical triggers are already taken into account when blocking any vanguard attack at that point. Not only that, add the fact that the pressure given to the new vanguard by Ashlei’s ability is easily stoppable by a single sentinel and we get ourselves with a pretty sub-par Break Ride ability. All is not lost, though. Although it is unlikely to happen every time, getting the Break Ride off early in the game can prove to be very devastating if the opponent is sitting at 2 or 3 damage without a sentinel in hand as getting a critical trigger off the Twin Drive!! and finishing the game at this very moment can happen. Pair Ashlei’s ability with Leading Jewel Knight, Salome’s Limit Break 4 and we get ourselves with a +10 000; 3 critical swinging vanguard threatening even if the opponent is sitting at only 2 damage! In this particular situation, Ashlei’s Break Ride can prove to be as scary as Majesty Lord Blaster’s pressure game.

As for Ashlei’s second ability, it is the typical +2000 power boost ability every Break Ride units gets. Since Fellowship Jewel Knight,Tiffany is the ideal starting vanguard for this clan, that additional 2000 power boost make it so that Ashlei can swing for decent numbers early on even if Tiffany is the unit boosting her. 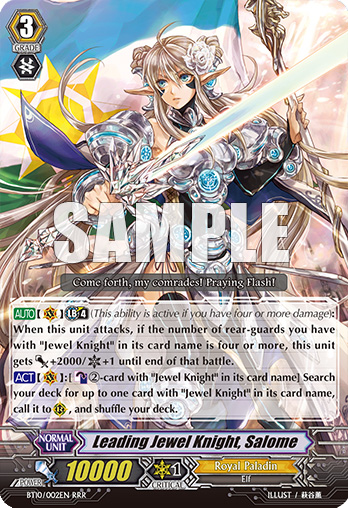 Leading Jewel Knight, Salome is the other piece of the puzzle to complete this deck and is arguably the most important one at that. Unfortunately for her though, Salome got hit with the Royal Paladin curse by getting a frail 10 000 body unlike the other units in other clans that are used to Ride over units with Ride Break abilities. However, to make up for this weak body, Bushiroad gave Salome a good ability that doesn’t require which her the 4 damage mark requirement. That alone enables her to be a little bit more than a blank grade 3 during the early game. For 2 special counter blasts, Salome is able to search the deck for any unit with ”Jewel Knight” in it’s name and superior call it on a rear-guard circle whenever she can and wants. The fact that she can call any Jewel Knight from the deck when she wants and swarm the field that way is a very important part of her game considering it fuels her other ability’s requirement at the same time. calling Ashlei as an attacker is part of having one of the ideal Jewel Knight field set-up. We also have to note that her ability to tutor is not restricted to grade 2 and lower ”Jewel Knight” units and that she can easily search for Ashlei when she needs to. This is is a notable mention since the ability to call Ashlei to the rear-guard circle pairs well with units like Toypugal and Tiffany while still maintaining the Jewel Knight field presence quota.

Continuing with the theme of constantly having and calling support on the field, Salome’s Limit Break ability requires her to have at least 4 other units with Jewel Knights in it’s name around her for it to work. Once that requirement is met, she gains an additional 2000 boost and a critical every time she attacks. Like I previously mentioned, this ability and especially the additional critical enables Salome to pressure the opponents when they are sitting at 3 damage forcing them to block the vanguard in fear of a critical trigger off the Twin Drive!! 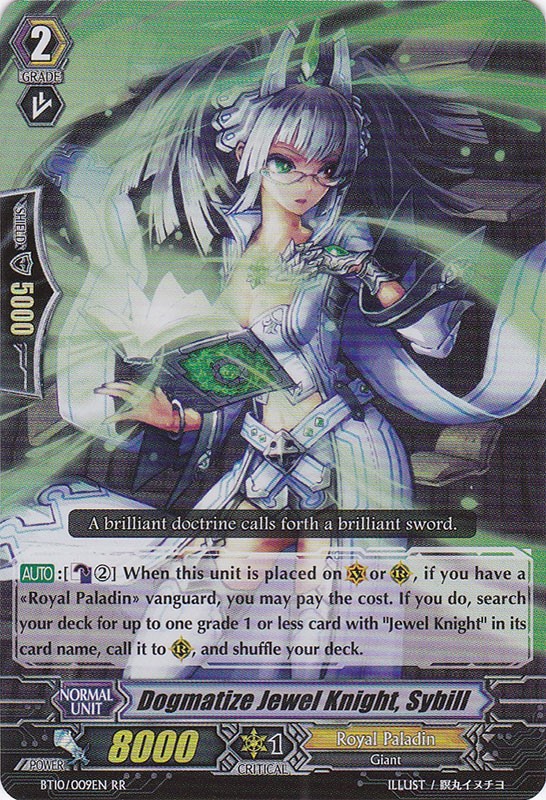 Another very important unit in Jewel Knight right now is the unit able to tutor her comrades from the deck: Dogmatize Jewel Knight, Sybill. Sybill is a really similar unit to Hi-Dog Breeder, Akane in the sense that she is used as an advantage engine as well as a field management engine. While her ability may seem redundant with Salome’s tutor ability, she’s still a useful unit to play when we’re sitting on Ashlei, waiting to reach the 4 damage mark to Break Ride on her. Also, unlike Salome, Sybill doesn’t require special counter blasts to utilize her ability and although that might seem like not much of a plus over her, it can still prove to be useful when non-Jewel Knights units such as Knight of Silence, Gallatin, Toypugal, Blaster Blade and Bringer of Luck, Epona get into the damage zone – all of which are prominent units in Jewel Knight builds. Like Salome, the extra tutoring from Sybill helps set up a lot of units in the deck that requires field presence for them to be used at their fullest potential (i.e Fellowship Jewel Knight, Tracie).

Example of a Jewel Knight deck 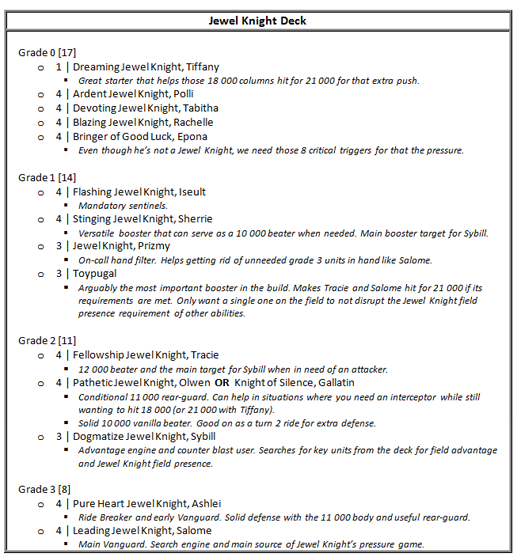 For closure, like their predecessors, Jewel Knights is a pretty straightforward deck to play. They focus on having a balance between a consistent center line and strong rear-guard lines all while being able to adjust them to their liking with their great ability to tutor anything from the deck. Jewel Knights, however, are obviously screaming for more support as we only got an handful amount of Jewel Knight units in this set and the harsh requirements for Jewel Knights’ abilities prevents us to use other Royal Paladin units in conjunction with them. In that sense, it’s a pretty hard deck to play even though their playstyle is so straightforward. But again, if you like consistency, power columns and girls in armor like myself, it’s probably the deck you’ll feel most comfortable playing!

Credits to TheCFdoukoukai for the match video