Well, now with Banquet of Divas out of the way, non-Bermuda Triangle players are probably looking forward to the new booster set ”Eclipse of Illusionary Shadows” who will introduce a new clan in the English meta : Shadow Paladins. However, even if the name of the set doesn’t really spell something outside of Shadow Paladin support, some other unrelated clans gets a fair amount of it in this booster set. Royal Paladin is one of those clans and even though they receive the least amount of support in this one, they’re still units worth mentioning. 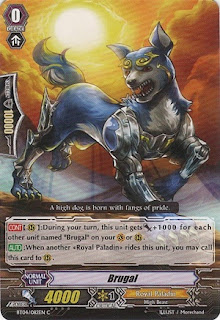 Rejoice Galahad haters! After 4 months, we are finally getting a starting vanguard that can move to the back row after being ridden and are not stuck playing the useless Stardust Trumpeter anymore. Although Bluegal’s skill is pretty bad, it doesn’t matter that much when you have King of Knights, Alfred in the same clan as this starter. Even with a bad skill, Bluegal can still play his part by giving a decent boost early game and also give Alfred the field presence he needs to reach those good numbers. Choosing Bluegal as a starting vanguard also means that we get the opportunity to fit in more cards in the deck that we previously could not fit because of the Galahad ride materials taking all the space. Units such as Lake Maiden, Lien (who works wonders behind Alfred) would now be able to find it’s place in the deck while other units that were previously there can be increased in numbers for consistency purposes (eg. Toypugal, Gallatin, Lamorak & Blaster Blade). Unfortunately though, these are the only real benefits this starter can give you as, like I mentioned earlier, it’s skill is pretty useless compared to other similar starters. Getting a little boost when there are other copies of himself on the field will probably never happen since the only reason we are playing this starter is to be able to fit in more important cards. It’s effect is thus contradictory to the whole goal of playing him in the first place. Because of that, I don’t think Bluegal is worth playing over the Galahad ride chain unless it’s to construct a particular build. Personally, I would rather keep the increased consistency of not missing a ride as well as the potential +1/2 Drangal offers rather than playing a sub-par moving starter and have a little more space. Don’t get me wrong though, Bluegal is still our second best starting vanguard and is the best choice when we want to build a deck that focuses on the new BT04 support, so definitely don’t count him out. 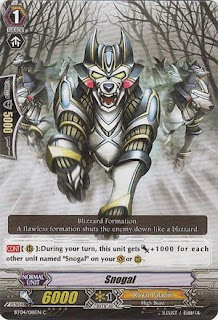 Snogal is probably the best unit out of this set for us. Searchable by Akane, Alfred, the Beast Knight and the Fang of Light (which I will cover later), Snogal is a 6k booster that can become an 8k booster if there are three of them are on the field at the same time. Kind of like his Hi-Beast brother, Toypugal, this unit is considered good – not because of it’s effect, but because of the support he has behind him and how well he can get tutored by it. With the amount of search engine the clan has for this card, getting three of them on the field is not that much of a task, and the ability to make good columns rapidly is increased when the deck is focused on getting them out. Though, because the Snogals are so dependent of one another, it is mandatory to play four of them for them to be the most effective. With that said, finding 4 slots to fit in Snogal in a Galahad deck can be kind of hard as all the units are pretty important to the deck’s functionality. To play and focus on a Snogal build, we, unfortunately, are obliged to play them with Bluegal as a starting vanguard because of space issues Drangal gives us. Also, because Snogal requires specific setup to be effective, the build and the whole goal of the deck might be susceptible to failure when playing against clans such as Kagero or Narukami that can aim your backfield. However, this is why backup units such as Marron and Toypugal are added in this build. Overall, paired with the right support, Snogal can be a very good and devastating unit. However, because of the lack of space in Royal Paladin’s most competitive build, him and it’s entire support needs it’s own build for them to function decently.

Beast Knight, Garmore is the direct support to the aforementioned units. Disregarding the fact that he can tutor Bluegal (for obvious reason), his ability to tutor a Snogal without having to rely on counter blast makes him one of the best search engine in the clan. When he is called on the rear-guard circle, he alone can create a decent/good column (depending on the amount of Snogals already on the field) pretty easily. That feature of his make him work extremely well when he is called with Alfred’s effect. Indeed, after being tutored by Alfred’s counter blast (3), Garmore can proceed to tutor a Snogal to make a good column for the cost of a card in the hand. So by just counter blasting (3) and discarding a card from the hand, we can give Alfred +4000 power and get a decent column! In a build that focuses on the dogs, this unit and Snogals are the key elements to make those needed fast lanes for rush and beatdown purpose. Only real downside to this unit is that he is only a mere 8k attacker which might hinders the build’s offensive prowess. However, like Akane, him being a grade 2 fixes that little issue as he can simply be used as a interceptor the following turn and give space to better attackers such as Palamedes. It goes without saying that if we can’t fit in the Snogals in Galahad, there’s definitely no space for the Beast Knight either. However, he is definitely a unit to max out in a build focused on getting the dogs out (no pun intended). 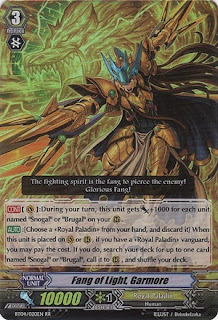 Last but not least, Fang of Light, Garmore is the grade 3 version of the Beast Knight. Like the grade 2 version, he can call out a Snogal from the deck when he comes into the field by discarding a card from our hand. What differentiates Fang of Light from Beast Knight is that no matter how many Snogals there are already on the field, if the called Snogal is placed behind Fang of Light, Garmore it will create a good column no matter what because of his 10k base power (so, he will hit for 16k at the very least). As for his vanguard skill, it is really what makes him unique from his grade 2 incarnation. With Bluegal probably already in the back row because of it’s on-ride effect and Snogal being there by default because of Fang of Light’s second effect, he is, on paper, always a 12k attacking vanguard. Which means that with the Snogal blizzard formation in the back row (eg, having 3 Snogals), he can reach the 21k mark which is the ideal number to reach. Though, because this Garmore requires setup to be an effective vanguard and hit high numbers, he gets out-shined by many other grade 3 Royal Paladin units such as Soul Saver Dragon that has an unconditional 3k boost and Alfred who is the most consistent vanguard in the clan. With that said, we can clearly say that Fang of Light, Garmore is nothing too exceptional and would be considered more as a tech than anything else, really.


All in all, the support offered in booster set 4, enabled Royal Paladin players to create another type of build without necessarily hindering themselves by playing a starting vanguard that has no effect whatsoever. Although the Garmore doggy deck might not be on par with the current meta RP build that is the Galahad deck, it is still a viable deck to play and have fun with. If interested, it is definitely something to try out.