Bermuda Triangle’s extra booster release date is approaching fast and to commemorate, this last entry post about this set will cover one of the most over-hyped and popular card in the Bermuda Triangle clan: Top Idol, Riviere! 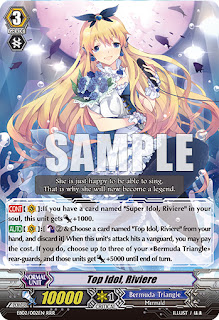 When this card was first released in the japanese meta, it created a lot noise and hype around the community. One of the reason why was because, at that time, Riviere was the first one to introduce this particular type of Ride Chain in the game (Now, we already have Spectral Duke, Lox and Ergodiel). The other reason was because of her Persona Blast that resembles a lot like Soul Saver Dragon’s famous and devastating effect Royal Paladins are known for. While it’s true that her Ride Chain is good and generates a lot of advantage if pulled off, a lot of people’s expectations were a bit too high when reading that card for the first time and ignored a lot of factors that made this card a little less devastating than she looked.

With the help of her unique Persona Blast and her conditional 11k defense, Riviere builds focuses on establishing solid columns as well as applying pressure early on to maintain a solid lead during the whole game. Indeed, by completing her entire Ride Chain and netting solid hand power advantage, Riviere becomes the best defensive vanguard in Bermuda Triangle due to her permanent 11k and the extra shield acquired when properly doing the Ride Chain. These two little pluses it gives you helps in maintaining a solid lead as it makes everything a little bit easier to guard. As for her Persona Blast, it is the main tool used to get that early lead & pressure game on. Swarming the field and pulling off Riviere’s Persona Blast as soon as she appears on the vanguard Circle (if all the conditions are met) is key to get the early damage lead as it pretty much guarantees damage from the boosted rear-guards as well. Other than that, Riviere build is your typical and straightforward beatdown deck. 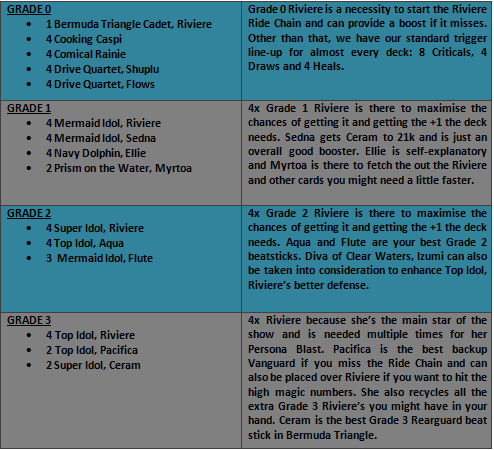 As for her cons, Top Idol Riviere, herself, doesn’t have a lot of them as the card is pretty good for what it is. However the lack of synergy with the whole clan is probably her biggest con as it hinders her capacity in being on par with the other main Grade 3 units from the clan. Because Bermuda Triangle is a clan that focuses more on getting raw advantage through soul and bounce mechanic rather than ruthless rushdown, Riviere, who is a rushdown oriented unit, seems kind of out of place in the clan. The fact that she relies on soul to be the most effective restricts key units such as Top Idol Flores, Turquoise Blue Tyrrhenia and Pearl Sisters, Perla from getting in the build and being useful without a drawback. With that said, aside from the occasional +1’s she will be getting through her ride chain, the build doesn’t gain much advantage and needs to rely more or less on triggers to get an edge against decks that gets a lot of it. In addition to that, again, because Bermuda Triangle is not an heavy hitter type of clan, they lack 9k and 10k boosters that would be great behind Riviere for her to reach the 20k or 21k magic numbers. The fact that she cannot properly threaten and can be guarded constantly by 15k shield late game is the main reason why she needs to make use of her Persona Blast during the early/mid game to establish the lead and the pressure game. Though, even with all those drawbacks, Riviere Rush builds can still be somewhat competitive and be able to win when taking the right type of guesses and pulling off well-timed Persona Blasts. Here’s a match video demonstrating Riviere’s potential and the effectiveness of her early pressure game against Pale Moon’s Barking Manticore.

All in all, while the Riviere Rush build is pretty simple deck to play, it’s ironically one of the hardest deck to win with consistently. The lack of synergy and support towards rushdown makes Riviere kind of subpar compared to the other Bermuda grade 3’s. Though, if you are into straightfforward and simple rushdown builds, Riviere might be the right choice for you. Hopefully, the next batch of Bermuda Triangle’s support will lean toward a more offensive approach to support Riviere’s type of play.

And this conclusdes the Banquet of Divas Overview entry serie. Hopefully, those little articles came in handy and helped a few Bermuda Triangle plays in choosing what type of deck they want to play and how to play them!
Tagged Bermuda Triangle, Overview
Subscribe
Login
0 Comments
Inline Feedbacks
View all comments
Select your currency
USD United States (US) dollar
CAD Canadian dollar
wpDiscuz