All right! With less than 10 days away from the official English release of Banquet of Divas in North America, let’s tackle on and review one of the strongest (if not the strongest) build this set has to offer by talking about it’s boss: Velvet Voice, Raindear. 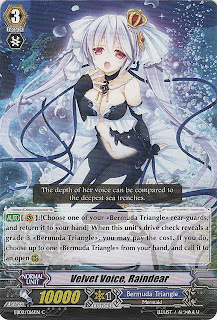 Raindear is the typical Grade 3 Drive checker for Bermuda Triangle and, surprisingly, the unit that exploits the bouncing mechanic this clan is known for the best. Similarly to Nova Grappler’s Asura Kaiser, when Raindear reveals a Grade 3 unit of the same clan as her during the Twin Drive!!, she can enable an extra attack by bouncing a rear-guard unit back to the hand and playing another one back on the field in Stand position. What’s so good about it is the fact that, when used with on-bounce effect units such as Girls Rock, Rio and Rainbow Light, Carine, you get to activate their effect giving you a +1 in term of hand advantage. Therefore, Raindear not only turns all the grade 3 units in the deck into Stand triggers, but can also turn them into potential +1’s with the right unit on the field (all that without any mention of getting triggers!) Of course, on paper, she’s one of the better vanguards in Bermuda Triangle but realistically, a lot of luck has to be involved to get the most out of Raindear. A Raindear that does not reveal grade 3’s during a game or bounces back units that gives no advantage whatsoever is possibly the worst vanguard in the Bermuda clan as she has frail defense (10k vanguard) and has no way to get to high magic numbers due to the clan’s lack of 10k booster. If all goes according to plans, though, she can be a real threat. Here’s a small example of a Raindear Aggro-Bounce build: 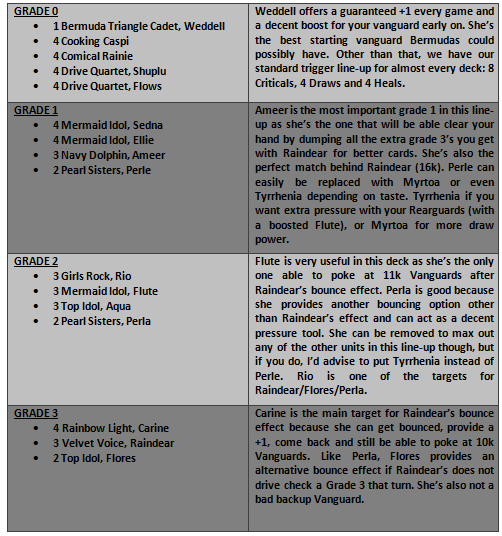 There’s really not much to say about Raindear build as it’s strategy is pretty straightforward : beat the opponent down while getting the best of both world (hand power and extra pressure) by getting ”double triggers”. It’s a solid build that relies more or less on luck to get wins. If you’re into aggro type of builds, definitely consider this deck as an option for a Bermuda Triangle deck. Here’s a japanese match video showing Velvet Voice, Raindear’s bounce mechanic against Megacolony’s Master Fraud (there are actually people playing this deck, wow…!)