The long awaited (not really) part 2 of Banquet of Divas Overview is here and this part will cover the Lena Bounce build! 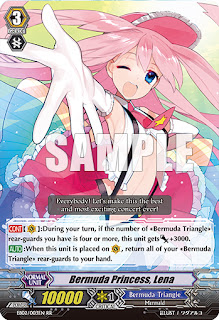 Let’s get right into it by talking about how my personal favorite unit of mine, Bermuda Princess, Lena, and her Re-ride Bounce build works. Similar to Soulless CoCo build in Oracle Think Tank, the Lena build focuses on riding the main vanguard of the deck (in this particular case, Lena) multiple times to net some advantage during the game while still applying decent amount of pressure with her conditional 13k power. Similar to the other bouncers from the clan, Lena’s main targets when she is played are Girls Rock Rio and Rainbow Light, Carine for their on-bounce effects. That, however, means that we need to let these on-bounce effect units on the field at least a whole turn and make them susceptible from attacks or retiring effects before getting the advantage off Lena’s effect the next ride phase. What’s great about Lena though is the fact that her effect is an all-in-one bouncing effect. Which means that she can make Grade 0 units such as Bermuda Triangle Cadet, Caravel and Bermuda Triangle Cadet, Weddell work as 10k shields (assuming the free bounce from Weddell is not needed) and get massive advantage a single turn if multiple on-bounce effect units managed to stay alive for a turn, all while being able to re-arrange your field. Given these facts, the Lena oriented build can be considered as a pretty gimmicky deck that can be easily be countered if the opponent is aware of what Lena is able to do. Some might even say that this build is a sub par version of Soulless CoCo deck considering the fact that Goddess of Flower Divination, Sakuya serves the same purpose as Lena, that she has an overall better effect (+4000 boost instead of +3000) and that the deck as a whole gains a lot more (and guaranteed) advantage than Lena’s. While it’s to some extent true, Lena has still proven to be quite a solid and competitive deck, so to all Lena enthusiasts like myself, don’t let those facts get you away from her and hope for better support in the future! Here’s a small example of a Lena Bounce deck: 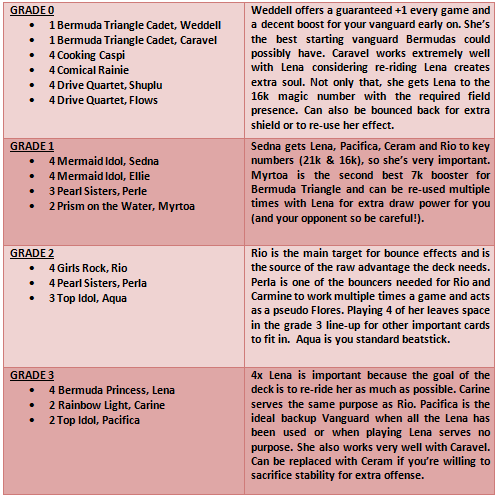 Again, a lot of changes can be made depending on taste, but this is what a Lena build should look like in my honest opinion. Don’t forget that in this particular build, the star herself is considered as a bouncer. In the build above, we have 9 bouncer (4x Lena, 4 Perla and 1x Weddell) and 6 on-bounce effect units (4x Rio and 2 Carmine). While it’s true that the number of bouncers doesn’t correspond to the numbers of on-bouncers, we have to consider that Lena’s bounce is not a direct bounce (meaning you have to wait a turn every time), so I figured it was all right to add more bouncers than on-bouncers.