With the extra booster 2, ”Banquet of Divas”, coming less than a 2 weeks away in the English format, people that are interested in playing our loli mermaids are probably looking at the possibilities of builds available for them to play with. Fortunately for us, Banquet of Divas is a extra booster strictly reserved to the Bermuda Triangle clan and thus means that there are a lot of possibilities of competitive builds available for us to make!

As of right now, there are only a handful of Bermuda Triangle builds that are competitive: Pacifica Recycling, Lena Bounce, Raindear Bounce and to some extent, Riviere Rush. I’ll be going through them one by one explaining what is the strategy behind each builds and how they are supposed to be played (without going too much into the details, though). 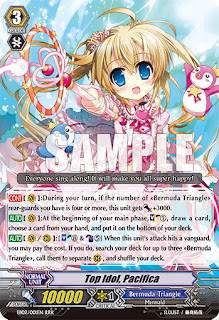 Top Idol, Pacifica is considered the standard build for Bermuda Triangle simply because she’s the most consistent vanguard unit between all the other Grade 3’s. Although she doesn’t really utilize Bermuda’s unique bounce mechanic, her ability to soul charge (1), draw and put something back into the deck (also known as recycling) makes her a really stable vanguard. She also has the ability to reach very high numbers with her +3000 power boost when the required field presence is there. With that said, it’s no surprise that the Pacifica Recycling build is considered the standard build as, her alone, offers both hand control and raw power. The only real downside to Pacifica is the fact that she doesn’t gain raw advantage by herself. Sure, she can recycle every turn and get rid of useless cards in your hand, but that recycling in itself is not a +1 as you don’t get extra cards off of it. That weakness, however, can be covered by her other support available in this set. Units such as Top Idol Flores, Pearl Sisters Perla and Turquoise Blue Tyrrhenia can make good use of Pacifica’s soul charge (1) to bounce units like Girls Rock Rio & Rainbow Light Carine back to the hand for raw advantage every time they hit. Overall, Pacifica is a really stable deck that relies on hand control and high field presence to achieve victory. Look below to see what a standard Pacifica deck would look like. 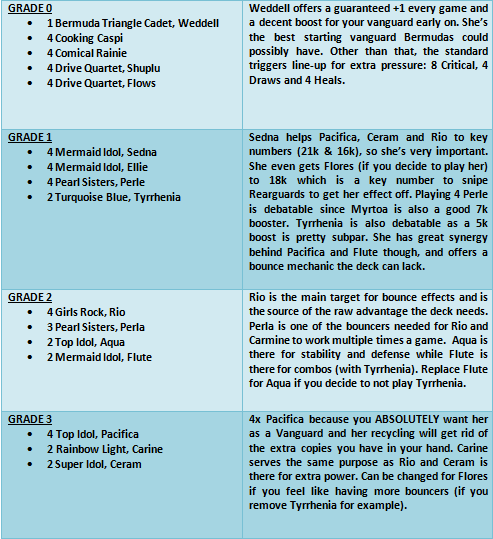 Like stated in the notes above, there are a lot of interchangeable things and a lot of room for tweaking in Pacifica builds. Indeed, while this build above is solid, some might want to change some few things here and there depending on their liking and still come up with something as solid. At the end of the day, if you are not into gimmicky decks and want something basic and consistent, Pacifica build is probably what you’re looking for in Bermuda Triangle. Protip: A good trick to build a good Bermuda Triangle deck is to count how many bouncers and on-bounce effect units you have and try to make equal in term of numbers. In this particular build, there are 6 on-bounce units (4x Rio, 2x Carine) as well as 6 bouncers (2x Carine, 3x Perla and 1x Weddell).

Stay tuned for the second part of the Banquet of Divas Builds where I will be covering Lena Bounce and Raindear Bounce Builds.