With Booster Set 9: Clash of the Knights & Dragons just recently released in America, we can now more concretely talk about how each individual cards and strategy can fare in the meta we’re currently in. Though, for Royal Paladin players like myself, this set didn’t bring a lot of cards and units to look forward to (Not that I’m complaining). Indeed, Clash of Knights & Dragons only gave us a single card for us to play with in our Royal Paladin decks this time around, but again, the card the set gave us is still a unit worth talking about. 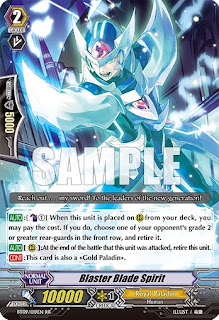 To be honest, when Blaster Blade Spirit was first revealed, I didn’t like him that much and always thought he was more of a Gold Paladin unit than he was a Royal Paladin one. One of the reason for that was because I failed to see how useful this card would be in a Royal Paladin build that would not focus in specifically getting him out from the deck to the field. Considering the fact that the only units that can call him from the deck are Starcall Trumpeter and King of Knights, Alfred, two units that already use plenty of counters to use their call abilities, I figured that getting the most out of Blaster Blade Spirit (gets called, uses his ability and attack with good numbers) would be in really situational circumstances. Turned out that I was wrong, but at the same time, kind of right. 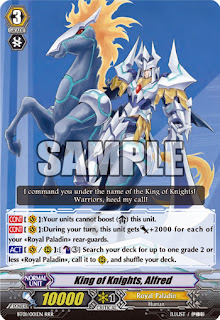 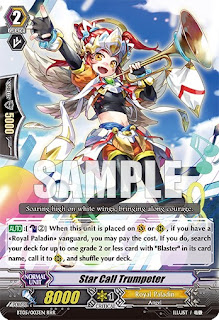 It is true that getting the most out of Blaster Blade’s spirit ability in a Royal Paladin deck is rare and most of the time, not really worth it. If you think about it, if you use Alfred to call him on the field for him to use his ability, you use a total of four counters to acquire a +2; something that Great Silver Wolf, Garmore and Listener of Truth, Dindrane can do with half the counter blasts and a single soul. However, It’s  a little bit later that I realized that Blaster Blade Spirit’s effects were never designed to be beneficial to Royal Paladins and that I was looking at him from the wrong perspective. Indeed, It’s only really the simple fact that the card is named ”Blaster” that makes this unit worthwhile for Royal Paladins.

After testing him in various builds, I figured that it’s really in the Majesty Lord Blaster build that this card really shows it’s potential. The fact this card acts like another ”Blaster” unit and that he can be used with Wingal Brave as soon as turn 2 makes it so that Majesty Lord Blaster is much more consistent at getting it’s setup early on in the game. Indeed, one of the problems with Majesty Lord Blaster oriented builds was that we always needed a piece of the puzzle (either Blaster Blade or Blaster Dark) in your opening hand to be able to use Wingal Brave’s ability at the grade 2 ride phase. So in reality, opening with a single Blaster Blade or Blaster Dark without any other pieces would kind of bring us nowhere considering we’d have to use the Blaster Blade/Dark in our hand at the 2nd ride phase to go search for that same piece of the puzzle… leaving us again with one piece of the puzzle in our hand at the end of the day. Blaster Blade Spirit solves this problem when having him and another piece of the setup in your opening hand as you can simply use him as a turn 2 ride and search for the other missing piece in the deck, leaving you with 2 pieces in your hand. Him having 10k power helps too as he becomes a 15k attacking Vanguard with Wingal Brave boosting him which makes it harder for your opponent to ”2 to pass” us with a single 10k guard on turn 2.

Another reason why I didn’t like Blaster Blade Spirit at first was because of his second effect. I always thought that the fact that he could die to anything that touches him when he’s in the rear-guard circle was a big downfall for the card. It’s after playing a bunch with him that I realized that it’s not so much of a bother I first thought it would be. Because all grade 2 are also interceptors in this game, him dying to anything that targets him makes him serve his purpose as an interceptor for the Vanguard. In a situation where the opponent attacks him with a column that would require us to guard the Vanguard for 5k or 10k, Blaster Blade Spirit just served as a regular 5k guard interceptor or even better, a special interceptor. In a situation where my opponent takes the opportunity and attacks Blaster Blade Spirit with a very weak column, they are most likely in a situation where one of their column is too weak to even touch Majesty Lord Blaster next turn – a fair trade I personally would take anytime. It’s really only in the situation where our opponent attacks him with a unit that has on-hit abilities that makes Spirit’s 2nd ability a real downfall. Like in the situation showed in the picture above, we will either need to spend guard for him, let him die anyway but not let your opponent do his pluses OR keep your guards, let him die and let your opponent plus – either way, it kind of sucks for us.

Overall though, he’s a solid unit and worth trying in Majesty Lord Blaster builds if you’re willing to sacrifice some other grade 2 units that fits in the build as well. The video below shows how well he synergies with the deck even with Japan’s restriction on Majesty Lord Blaster, Alfred and Wingal Brave.