Well, I know I usually do overviews and analysis about new cards/decks either before or a short time after a set comes out in English, but this time around it was a little more difficult for me to come up with a quick article since I haven’t really touch Angel Feathers since Booster Set 07: Rampage of the Beast King came out. While it’s true that BT07 was the start of Angel Feather’s rise as a competitive deck with Shamsiel, I just didn’t like the direction Bushiroad took with the clan as a whole. Being a Royal Paladin player at heart, defensive play-style never really appealed to me (Shamsiel was kind of ugly too), so I dropped the deck to focus on Royal Paladins yet again. When Metatron was first spoiled though, my interest for this clan quickly rose back up and after testing her deck a little bit in the Japanese format, I promised myself that I would play her and pick the clan back up once she would be released in English. Here we are now, half a year later, and I’m still hyped to play again with the Angels that I once left and crush fools with that sexy beast called Metatron. So without further ado, let’s get right into the analysis of what a Metatron deck would look and play like! 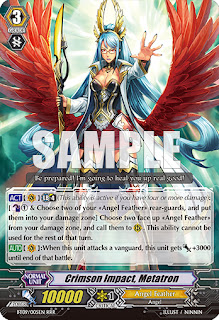 There she is, our new Angel Feather vanguard unit that will finally make us able to push forward and apply offense. Not to say that Circular Saw, Kiriel was not already doing that in some way, but Metatron is definitely a better unit for that kind of play-style. Like all other vanguards in Angel Feather, Metatron is a fragile unit. Being a 10 000 base unit makes her a really frail vanguard on defense considering the magic numbers required to bully her are easily achievable numbers nowadays. With crossrides and grade 2, 12 000 power beaters roaming the meta, 10 000 base vanguards is something really difficult to defend. However, to compensate for the lack of defense, Bushiroad gave her a 3000 power boost every time she attacks a vanguard. This extra 3000 power is something really important to her game as she can now reach stage 3 magic numbers with the right booster behind her and with a good 10 000 booster like Clutch Rifle Angel, it even means that she can properly hit the oh-so popular crossrides!

While this is great and all, this is not exactly what makes Metatron the best offensive Angel Feather vanguard thus far. Her Limit Break 4 ability allow her to make other units in this clan reach insane amount of power on the rear-guard zone. For a single counter blast at four damage, she’s able to switch two rear-guards from the field for two face-up units in the damage zone once per turn. This may seem lackluster at first since it does not generate any type of advantage, but when used with the right units on the field, the combo ability and synergy it produces becomes endless. But who exactly are the units I am talking about…?

Remember them? For those who have stucked with Angel Feather post-BT07, you probably do. For me though, I remember them as being pretty sub-par units in my Kiriel beat-down variants. In Metatron builds, these units are the heart and soul of the deck as without them, Metatron would be useless. Since they all get additional power when a card gets put in the damage zone, using Metatron’s Limit Break 4 when they’re all on the field makes them all get a total of +4000 power and thus, make them above average units. Thousand Ray Pegasus becomes a 11 000 booster, Million Ray Pegasus becomes a 13 000 beater and The Pheonix Calamity Flame becomes a 14 000 beater. If we do the math, having them on a column after Metatron’s ability makes them reach either 24 000 or 25 000 for a single counter blast per turn – pretty insane. One thing to note about this particular combo is that these 3 units need to remain on the field during the damage swap phase for them to get the boost from their ability. So even with the perfect field of 5 pegasus (3 Thousand Rays and 2 Million Rays) and Metatron, you have to keep in mind that after Metatron’s ability, two of the pegasus are not going to get their boost since they weren’t there when you took the extra damage. This is why we have to be very careful with what we put in the damage zone with Metatron’s ability and why a certain unit becomes very important to the deck… 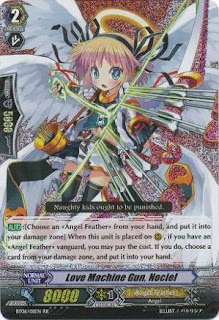 Love Machine Gun, Nociel is one of the most important unit for this deck’s combo-ability as she negates all the aforementioned drawbacks Metatron’s Limit Break has. Because her ability to swap a card from the hand to the damage zone is on-call, calling her from the damage zone with Metatron’s Limit Break grants you an extra damage swap for the pegasus on the field to get their boost. Not only that, if Nociel and a Pegasus are both called from the damage zone from Metatron’s ability, that pegasus, that would otherwise get no boost, can get his ability triggered by the Nociel that just got called! So if we take the previous situation where we had a field full of pegasus, swapping two pegasus from the field for a Nociel and a pegasus will leave us with a total of three pegasus on the field having an additional 6000 power, one pegasus having an additional 2000 power and a single Nociel. Another reason why Nociel is such a good support unit for the deck is because she also has ability to unflip a counter every time we use her swap ability. This little aspect works really well in this deck considering Metatron’s Limit Break cost is only one counter blast. It gives Metatron limitless resources for her ability and recycles the units with ”in-damage” abilities this deck has.

Look at them combos!

As for direct support for Metatron, Bushiroad gave us the Crimson sisters to help us get her at turn 3 more consistently. Similar to Ezel’s superior ride with Crimson Lion Cub, Kyrph, Metatron is able to get superior called from the deck if we have Aphrodite on the vanguard circle, Nahas & Baruch on the field and put them both in the soul. While it might be good on paper, the superior ride doesn’t actually generate advantage and is only really useful if we’re in a pinch. Aside from being superior ride material, Baruch and Aphrodite are decent units at best. For Baruch, being a 7000 base booster doesn’t really help the deck achieve the numbers it needs to hit hard. In the 10 000 vanguard match-up, she’s an okay booster (Makes Metatron swing for 20 000 and Million Ray Pegasus for 20 000 after Metatron’s Limit Break) but in the 11 000 match-up, the 7000 power boost is sometimes not enough (only really useful behind Pheonix after Metatron’s Limit Break). Aphrodite is no different than Baruch and suffers from the same problems (Can only reach 21k after three swaps). Their ability is a nice little thing to have if you want to break the cap with Metatron, but considering our new draw trigger, Fever Therapy Nurse, does the exact same thing, they both are sometime not necessary. This is the reason why some people prefer not to play them and have space for more useful units such as Bethnael, Examine Angel and Doctroid Micros. Though, if you’re someone like me and appreciate consistency, you’ll like the option of having them as a back-up plan if you’re about to mis-ride your grade 3. 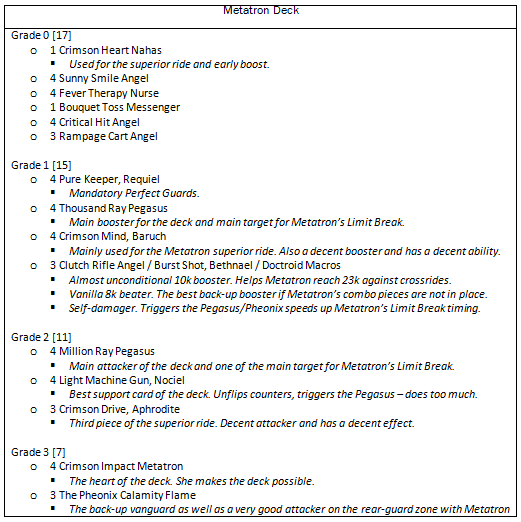 Well, that is it. That is what a solid Metatron build could potentially look like. It’s definitely a deck to try out if you like offensive play-styles or you’re tired of seeing Shamsiel’s face playing defensively with Angel Feathers. Even though it’s an agressive deck, playing the deck still requires a lot of thought process for it to work efficiently. So for those of you that like to work to pull off their combos, this deck might be fun for you.

Below is a match video in which you can see Metatron’s combo ability in full effect – definitely give it a look!

Credits to ImagineYourGoddess for the video